The use of rubber has been documented since Pre-Columbian times as old as 1600 BC in South America. Latex or the sap of the Para rubber tree has been collected and used for at least 2000 years and was brought back to Medieval Europe by the Spanish conquistadores. In 1844 Charles Goodyear patented a process to harden rubber called Vulcanizations after the Greek God of fire Vulcan. The commercial production of rubber flourished after Henry Wickam gathered seeds from native Brazil rubber trees and brought them to England in 1876 where they were grown into seedlings and then exported to the British colonies in Indonesia, Singapore, Malaysia and large rubber growing plantations were established. 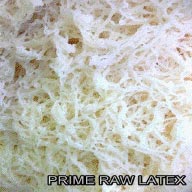 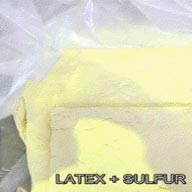 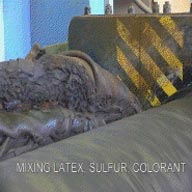 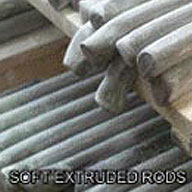 The industrial revolution brought new needs and uses for rubber products especially vulcanized rubber and the development of processes were mirrored in rubber plants both in the U.S. and Europe. Much of the history of techniques, processes, machinery and chemicals used in early vulcanized rubber making are poorly documented and changed over time with new experimentation in vulcanized rubber making. A combination of records is needed from both American and European sources to piece together a more complete picture of the chemicals, processes and conditions used to create vulcanized rubber at different time periods. This documentation is difficult to find and analyze with some gaps and omissions in the timeline persist and practices at different factories varied.

Vulcanized rubber is made by reacting natural latex (the sap of the rubber tree with water removed) with sulfur and other chemicals under high heat and pressure. The monomer – long single atom chains – in latex can form cross-links (bridges between monomer chains) with sulfur to form polymers (interconnected monomer chains) which change the elastic properties and hardness the natural latex and also impart new physical characteristics. The speed of this cross-linking (cure – term) and the extent, pattern, and number of cross-links determine the ultimate characteristics of the vulcanized rubber. The pattern and number of cross-links is partially determined by the purity of the latex starting material and the number and type of impurities found in the starting latex. In chemical terms any impurity will change the crystallization (shape and design) or lattice (ladder forming) reactions. In determining the properties and recreating a vulcanized rubber from a Chedeville specimen it is important to determine what these impurities are and to add them back to purified latex in order to recreate a similar cross-linking pattern in the final vulcanized rubber. 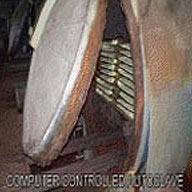 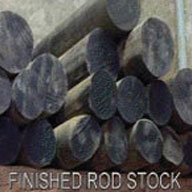 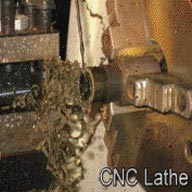 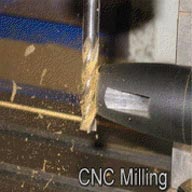 Various accelerators (chemicals that make the cross-linking reaction proceed faster) were also developed and used over time to decrease the time, pressures, and temperatures needed to increase the cross-linking speed and decrease the time necessary to produce vulcanized rubber. Today entirely new and more efficient accelerators are used. The original accelerators used at the time that vulcanized rod rubber was produced to make the Chedeville mouthpieces were metals and various metal compounds (oxides and salts primarily of Zinc). In recreating Chedeville rod rubber stock it is imperative to determine what type of accelerator was used and at what concentration in order to recreate a similar material.

Carbon black (black carbon residue made from combusted organic material) is added to latex in the vulcanization mix to give it the characteristic black color. Research has shown that the amount and composition of the carbon black also has effects on the finished vulcanized rubber in terms of physical properties (described later) and acoustic properties of the finished rubber. The amount and type (chemical composition) of carbon black used in Chedeville mouthpieces was also measured by sensitive chemical and instrumental means.

Today and beginning after World War II, most rubber products are made from synthetic rubber molecules which can be molded and then quickly vulcanized which can have many different physical properties for special purpose needs. Prior to WWII vulcanized rubber had limited flexibility in physical properties and most products were made by machining the needed parts for larger pieces of rod or bar stock. Chedeville mouthpieces were made by this technique of machining the mouthpiece from vulcanized rod rubber stock. Today precise Computer Numeric Controlled machines ca reproduce measurements to thousands of a millimeter.

Vulcanized rubber can be characterized by an analysis of its physical properties by a number of techniques. Many test of physical properties have been standardized and codified by the rubber industry so that comparisons between types of rubber and manufacturers can be more easily accomplished – these are physical tests of the elasticity (stretching capabilities), tensile strength (how strong it is before breaking) and the pliability of the material (how it deforms under pressure). Many of these tests have been outlined in extreme detail using specific testing machines by the ASTM (Association of Standard Test Measurements) and are known collectively as ASTM tests for rubber.

Chemical tests involving state-of-the-art sophisticated testing instruments (such as Mass Spectrometry) can analyze samples of rubber and determine what impurities are present and analyze the residues of metals and other accelerators used in the vulcanization process. Using these chemical tests a recreation of the latex with specific impurities and vulcanization accelerator compounds can be estimated – although temperature, pressure and timing of cure are also important variables (things that affect the final product).

In recreating a vulcanized rubber characteristic of the rod rubber used in Chedeville rubber mouthpieces it is important to try and recreate the late with impurities, the types and amounts of carbon black, sulfur, and accelerator compounds, heat, pressure and timing of the vulcanization process, and also to look at the “Fingerprint” of the bonding patterns in the finished material to see if it is similar to an authentic Chedeville specimen. Since all of these aspects interact and affect each other it is a “best guess” and takes an experimental approach to reproduce a particular form of vulcanized rubber and may take many prototype batches making slight modifications of various parameters to achieve similar results to the original material. Using all of the testing procedures together will give a “Best” scientific certification that a recreation rubber matches the characteristics of the original sample.

*(Note – some of the acoustical testing procedures are proprietary tests that I have developed and are not described and other tests are applied in proprietary ways – this is the most difficult to explain in layman terms.)

Subjective descriptions about the sound or tone of woodwind mouthpieces including “Clear”, “Centered”, “Resonant”, “Ringing”, etc. are described for various mouthpieces and ultimately are based on the acoustical characteristics of the configuration of the mouthpiece and also on the characteristics of the material. Some of the acoustical properties of the material itself can be measured but it is difficult, but not impossible with deep analysis of the parameters measured, to equate analytical measurements with subjective descriptions of acoustic properties perceived by the ear of the human observer.

Another acoustic characteristic of rubber specimen is Vibration Frequency Spectrum Analysis where two spectrums (graphical plotting of results) are obtained and compared when various increasing frequencies, at increasing energy levels, are applied to a material and sensitive sensors receive and measure the frequencies and frequency energy emitted from the material which graphically plotted. Due to the characteristics of the material including the measured Energy Transfer Impedance certain sound frequencies will be entirely and equally emitted but others will be modified, enhanced, or muted into new frequency patterns and energy levels. A visual and statistical analysis is performed on the two spectrum curves to see and determine how the material emits frequencies. One type of interesting analysis of these patterns is to correlate the subjective terms of tone – e.g. Resonant – with different patterns of frequencies emitted by the test material. This analysis itself can be subjective but often patterns emerge which are characteristic.